I attended my Granddaughter's Kata and Sparing tournament, last Saturday when we visited them for a couple of weeks.  This was the first tournament held for quite awhile in the area so there was many participants from Saskatchewan and Alberta.  What a sight to see and the best part is both girls placed in their respective groups.  As this is their first year in Karate they are both white belts and with only being 1 1/2 years apart in age they are in the same class.  In the tournament they are put into groups by size thank goodness as the youngest, Brooke was the second smallest in the whole tournament.  Brooke (5 yrs old) finished with a Bronze and Maddie (7 yrs old) scored a silver.  There were many cheers from the MacKie clan when they received their medals I'll tell you.  We all left with Happy hearts and proud as any family could be. 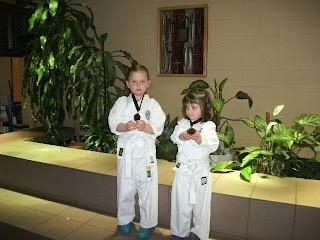 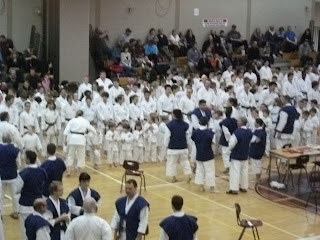 Hopefully they'll earn their yellow belts and by the by they did beat out the boys in their local club, just saying!

So the Anniversary quilt is now waiting it's turn on the Gammil in Vermillion and what a relief that it is, so close to being done and I guess I do work well under pressure.  This is it before I put on the dark purple flange and for the life of me I can't find a picture of the pieced top.  Gad I hope I took a picture but it wouldn't surprise me if I didn't.  Too late now I guess but it was really pretty, really! 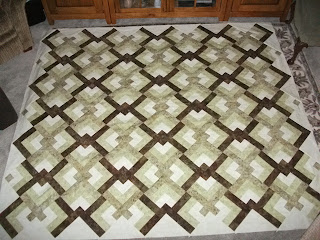 My newest toy is the early gift I received for Mother's day and if it wasn't for my Daughter-in-law, Teri I wouldn't have gotten it.  This how the story goes, when having coffee one morning sitting with my sons I said that because you both always say you don't know what to get me for Mother's Day I would love to have a Keurig coffee machine.  Talk about a blank look on two faces, first I had to explain what it was and it doesn't help that the oldest doesn't even drink coffee.  There I sat waiting for the wahoo, now we know what to get you, dead silence.  I even said they were on sale right now at Walmart, still nothing.  So, the day before we left I decided to just buy one myself and Teri saves the day and said that she is buying it and will extract the money from those deadbeat son's of mine.  Bless you Teri!  So this is my new non-quilting toy and I can't get enough of it, hence swimming in coffee and loving it.  Yes, I still love those son's of mine, they just suck at gift giving, for me anyways! 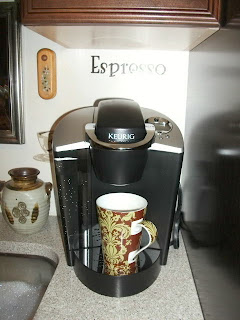 Hope you all have a quilty day because I can't wait to get back into my sewing room after being away for 2 weeks, gonna start that Bernina and watch out for flying thread!